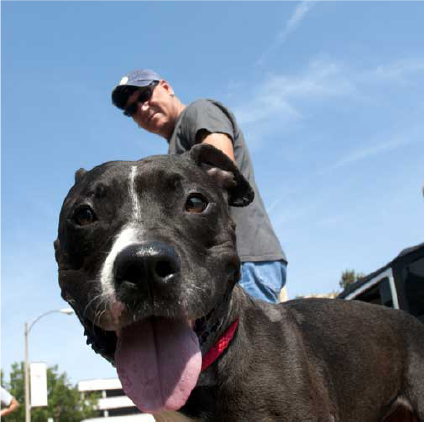 THE CATCH-PHRASE FOR RANDY GRIM IS “UNLIKELY HERO.”

For decades, Grim has been trying to call national attention to the scourge of abandoned, abused and feral street dogs. Now he is succeeding—in the national media, in legislatures, where others with more clout have failed — or never tried at all. Why so “unlikely” a hero? It takes an extra dose of real courage -- Mark Twain’s kind, the kind needed to act when you really are afraid -- to mount daily rescue operations on some of this country’s most dangerous streets. It takes an extra dose of courage for Grim even to publicize these dogs’ world of misery. He is crippled by panic attacks and phobias (of public places, parties, elevators, driving). After rescuing his first street dog, he couldn’t look away. “How can I?” he asks. “Each one says, ‘don’t leave me here.’” And so the man who must pop Xanax to walk through an airport refuses to leave a starving, terror-stricken German Shepherd on a dark, icy and stormy St. Louis street, even when a threatening tenement resident has him on the business end of a gun.

Likening his position to captain of a punctured life-raft, Grim rescues beaten, feral and abandoned city dogs from St. Louis’s meanest streets. These are the untouchables, the dogs other shelters, many with multi-million-dollar budgets, call “irredeemable.”

To date, Grim has rescued many thousands of street dogs, many suffering from gunshot wounds or amputations, others simply scared. Almost by force of his crippling anxiety and phobias, (possessed of what one reporter called a “sly and off-beat sense of humor,” Grim is, oddly, one of the funniest people on the planet) Randy is a very special man who against all odds is gaining national attention for an underground epidemic, a national disgrace. By redeeming the dogs, he’s redeemed himself. Something in what Grim is doing is catching on, and mattering.

Randy Grim officially founded Stray Rescue as a non-profit organization in 1998, but that’s not where the story begins. If you ask Randy’s family, they will tell you that he started rescuing animals when he was a five year-old! Wanting to get closer to his dream of working with animals, in 1990 Randy owned and operated “Bark Avenue,” a dog grooming shop in Lafayette Square, where he would see stray dogs roaming the streets – scared, hungry and in desperate need of help. It quickly became clear to him that there were simply no resources available to help get them off the streets to safety, and he just couldn’t stand to see them suffering. Taking matters into his own hands, Randy opened his door, rescued as many dogs as he could and started taking them into his home – nursing them back to health and giving them to any friend or family member who would agree to take them. Randy’s philosophy has always been, “if I don’t help these animals, who will?”

About eight years later, Randy spent his life-savings to invest in a building on 18th Street that was built-out as a shelter, and Stray Rescue of St. Louis was officially born! The 18th Street shelter is still in operation today – housing 9 dogs. Through Randy’s sheer will, dedication and love of the street dogs, Stray Rescue has grown and evolved into the organization it is today. The state-of-the-art Pine St. shelter opened in 2010, usually operating at full capacity. Stray Rescue also has 60 staff members (including an on-site trauma center), a legion of 300 foster parents and more than 1,000 volunteers from around the community. On average, Stray Rescue saves and adopts out 3,000 companion animals a year.