Stray Rescue doesn't get a summer vacation from abuse!

Stray Rescue doesn't get a summer vacation from abuse!

Imagine lying on a busy street after being hit by a car, but you can't even get away from the oncoming traffic.

Now imagine being a small dog that easily is not seen but still alive and in horrific pain. That was what our little champion, Rupert, suffered. I will never forget holding him in my arms, looking into his desperate eyes as we rushed him to Stray Rescue's trauma center. "Hang in there, little buddy" was my mantra. Big dogs find the mean streets a hard-hitting life of hell, but a small 20 pound dog finds those same streets a death sentence. But there is hope, and that hope comes in the form of Stray Rescue of St. Louis and its army of supporters. Rupert is now a very happy pooch. Although paralyzed, he is moving forward in life, never looking back to those bleak dark days. He even has a set of wheels to help him get around! YOU made this happen with your generous donations. His life is worth savings. Just ask his new family!

Unfortunately, St. Louis is known across our country as the most violent city in America. It is also known as one of the most compassioinate. Beaver was a street dog, condemned to live a life consisting primarily of scrounging for food in our depressed alleyways. Unfortunately, he ended up on the wrong side of a criminal's gun, an extreme animal abuser. Beaver endured being shot numerous times in his chest and extremities at point blank range. Monsters come in many forms, and Beaver's demon was a horrible human being who is still out there walking our city streets. Stray Rescue treats hundreds of gunshot bictims a year, and it is heartbreaking. But again, there are blessings that come from tradgedy. YOU made sure he received his lifesaving medical care, and our team at Stray Rescue was there to also heal his emotional wounds. Because of you, he now has a real Dad, a protector his new best friend. Beaver never again has to worry abou this safety; he i safe now in his loving adoptive home.

Domestic vioence doesn't always affect just humans; the family pet is usually an additional victim in a violent household. Little Lou is a petite Chihuahua who didn't stand a chance against his abusers. I have actually never seen a dog beaten so hard in the face that his jaw was not just broken but didn't appear to be attached anymore.

His freedom ride to the trauma center was tense. It made both Donna and I tear up. Beating the innocence out of one of God's sweetest creatures hurts you to the core of your soul. He immediately had to have expensive surgery and now wears a face brace that is surgically pinned into his jaw. Eight weeks have passed, and soon he will undergo one more surgery. This is where YOU come in. We need your donations so he can heal and be placed in a home where beating your dog is only unacceptable but unimaginable. Little Lou deserves an ending like Rupert and Beaver. A happy one. 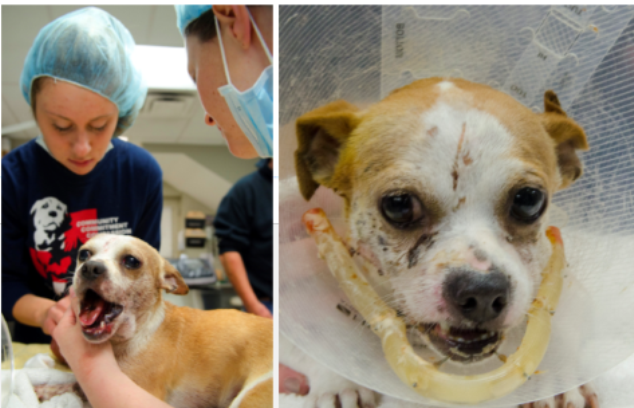 I just introduced you to three Stray Rescue dogs out of thousands who also have a story to tell. Rupert and Beaver survived because of your generosity. Please show that same generosity for Little Lou and the countless other dogs and cats in our care to ensure a complete recovery both physically and mentally. They need YOU!

Summer is the time when donations dwindle as people take off for their vacations. These amazing animals don't have the luxury of time and could use a helping paw today.