Rescue Stories A touching day with Donna of Stray Rescue

A touching day with Donna of Stray Rescue 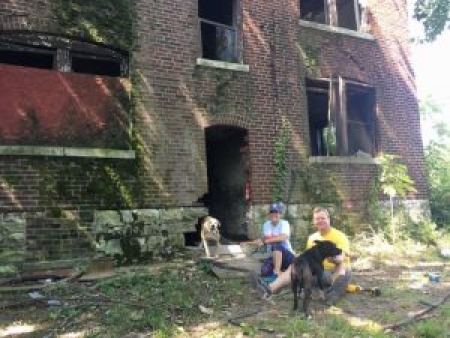 I started volunteering with Stray Rescue several years ago, at a difficult time in my life as I muddled through the fog of grief after losing someone I loved. Many of the dogs had weathered untold counts of cruelty and neglect, their shy gaze and patchwork of scars a map to their tragic past. But yet these dogs were so eager for human affection, so intensely happy to be safe and fed and warm that it seemed a miracle – a triumph of spirit with each rescued pup. Their ability to joyously move forward into their new, better lives after enduring such distress was an inspiration and a comfort to me, and helped me find happiness in my new life as well.

About a year ago, my family made the decision to foster with Stray Rescue so that all of us could be involved in supporting the mission. There felt like no greater accomplishment than taking in a timid, skinny, stinky pup who would be unrecognizable weeks later as a playful, healthy and loving dog. It is bittersweet to let them go, but knowing they have found their perfect family and they won’t have to worry about returning to their life before Stray Rescue is cheerful comfort.

Both my volunteerism and our foster experiences made me even more passionate about the work Stray Rescue continues to do. When the opportunity arose for my husband and I to spend the day with Donna and understand more about where these dogs come from before they land at Stray Rescue, I was absolutely elated.  Donna told us about a puppy she had rescued a few weeks ago, living in an abandoned home in a dilapidated block of north city. She had been able to rescue one pup, but the neighbors had taken the other three siblings. Donna had seen the pup’s parents, but was unable to take them with her. She hoped they were still there and with luck we could get them out today. 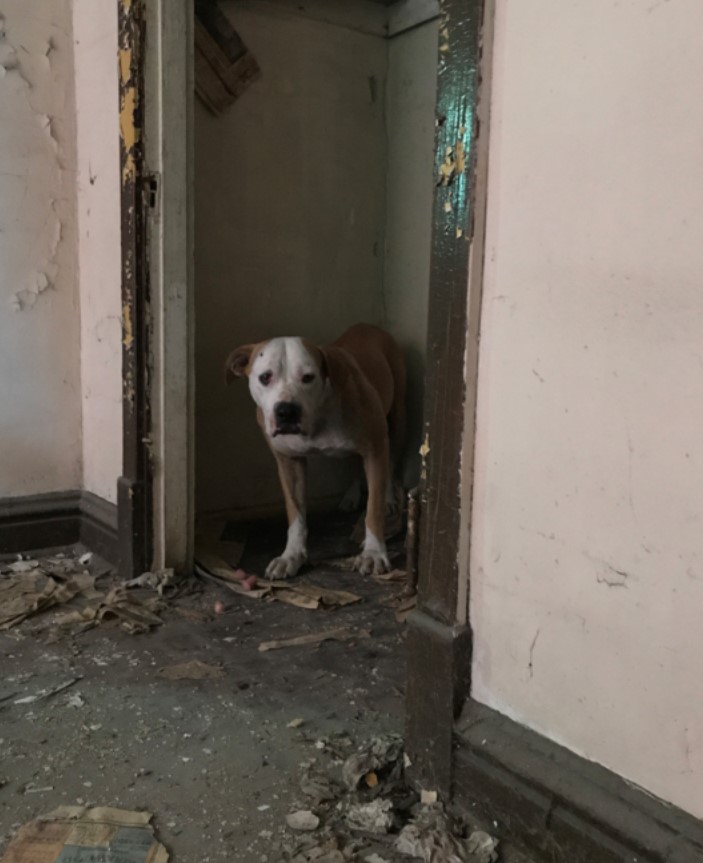 When we arrived at the abandoned house, I realized that calling this structure where the dogs lived a “home” was a gross misuse of the word. Old boards fell from the windows with nails protruding; the thick, wet humidity of plant overgrowth and mold emanated from the crumbling brick archway that was once a door. There were huge holes in the floor that required skillful footwork to make it into the building without dropping to the basement below. We heard the barks of both parents, and were relieved they were still inside. We made our way up the staircase, walking over old clothing and debris and rotted wood. Chunks of missing ceiling allowed light inside, and Donna found the momma dog cowering in a back room. As we approached, she fled to a tiny closet. Donna opened a can of hot dogs and began tossing them to the terrified pup, talking to her softly while continuing to move closer. 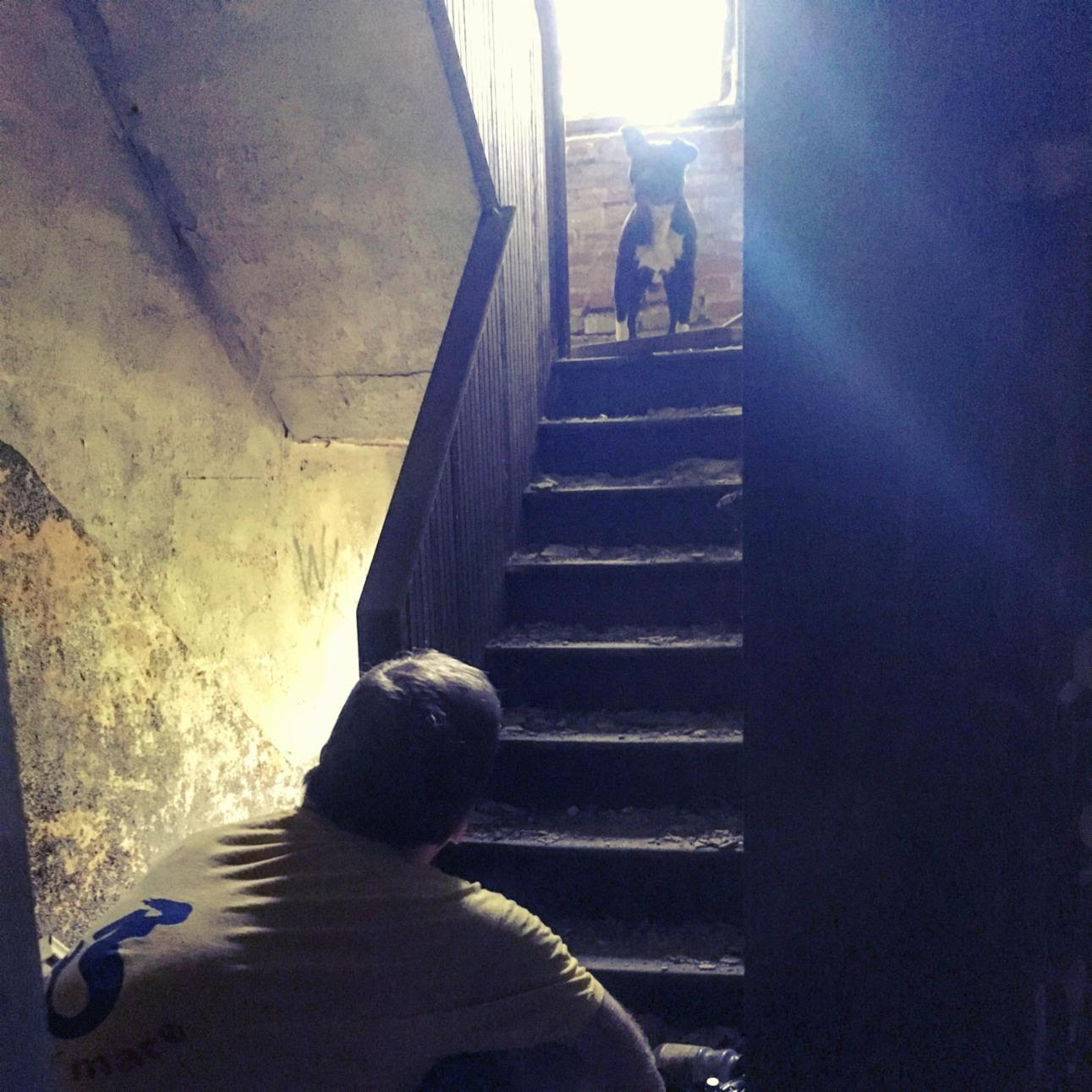 I heard movement behind us and looked up to see the male dog apprehensively coming down the stairs. He seemed desperately to want our attention while still being a bit unsure. Donna managed to secure a slip leash around the momma dog’s neck, who was still cowering in the closet. I held the leash while Donna and my husband went to the stairs to coax the papa dog down. He was less fearful than his companion, and they had him leashed and out of the house quickly. He wagged his tail and closed his eyes as my husband scratched his head and petted him. The side of his neck was an open, oozing wound, punctuated by a deep hole in his ear – but he did not seem to care, he sat next to the people who had saved him, relishing human affection.

Momma dog was hesitant to leave the closet. She did not yet trust the people there to free her, and tiny scars and broken teeth told us that her reluctance was perhaps well-founded. We eventually carried her down the stairs and over the gaping holes in the floor to the yard with her companion. We named them Sam and Diane, after the Cheers couple. Once in Donna’s jeep heading back to the shelter, Diane rested her tired head in my husband’s lap and closed her eyes. Whatever anguish she had endured before our arrival was over, and she was finally safe. 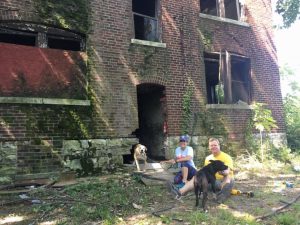 The shelter staff was ready when we arrived with Sam and Diane. Not only the clinic staff, but also adoption team members and other employees were in the intake room to quickly get the dogs’ medical needs attended and set up space for them. Immediately, the dogs received vaccinations and preventatives, and were led to private rooms with water and blanketed beds to decompress. 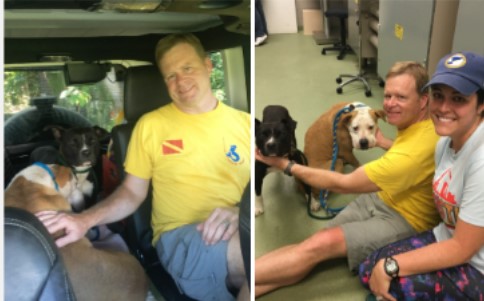 As we settled Sam and Diane into their new apartments at Stray Rescue, Donna got a call from a concerned neighbor about five to seven puppies running loose in East St. Louis. We made our way across the bridge and Donna relayed how difficult it can be to catch puppies, especially if they are hiding in a wooded area or without their momma. Arriving at the address was again a shock to the senses – impenetrable overgrowth hung heavy all around what was once a home, boarded up windows barely concealing the gut-churning smell of rot from the inside. Donna spotted three pups in the backyard, but they darted into the weedy tangle of bushes and trees. There were signs that dogs had once been kept in the building – broken, filthy crates and kennels dotted the back yard and a rope with a carabiner hung from the window. Paw prints stood out in the dirt on the deck. It was an ominous, disheartening scene. 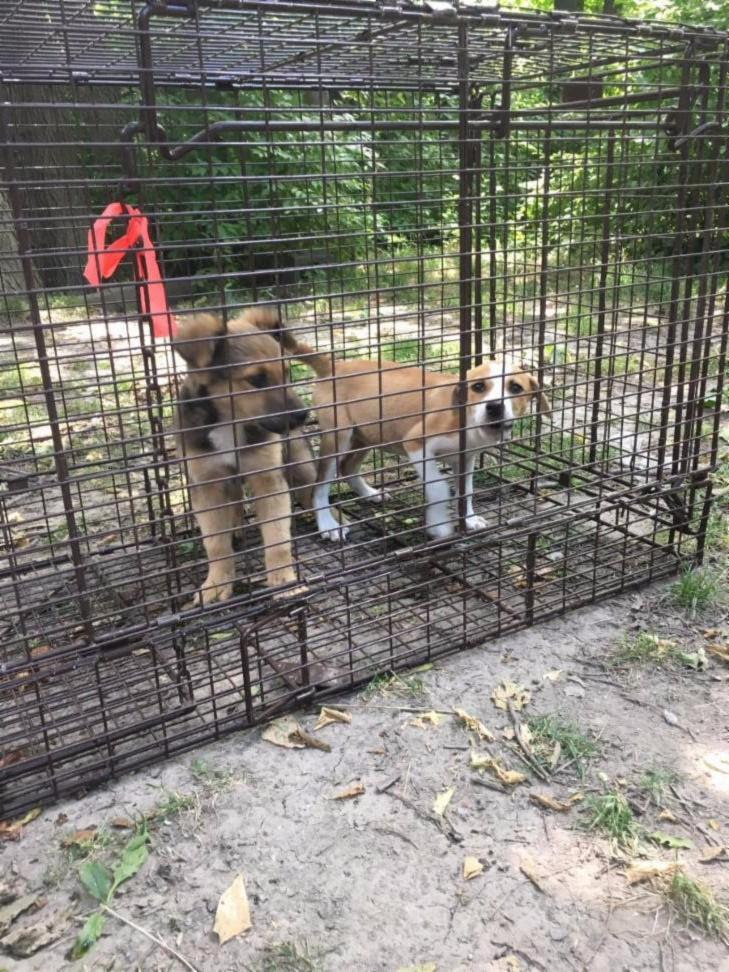 We began to comb through the overgrowth looking, and listening, for the puppies. The caller had said they were perhaps only two months old, and it was almost impossible to see through the jumble of vines and bushes and weeds. Donna suggested setting a trap – a large wire kennel with a door that would close when their weight triggered it. She poured out a can of dog food and we waited. Two puppies approached the trap and enthusiastically began eating, but their weight did not trigger the trap to shut. You could see their ribs protruding above their bloated bellies and they dashed back into the thicket quickly. Donna made a few adjustments to the trap and we waited again, successfully confining two babies – a boy and girl. Twice more we set the trap and anxiously waited, catching all three of the remaining siblings. It felt like we won the lottery, plucking those tiny little babies out of the oppressive 97 degree heat that was buzzing with insects and heavy with filth. The five babies huddled together in the back of Donna’s jeep, and we were once again greeted at Stray Rescue intake by a staff prepared to jump start their new lives with medical care, food and water. We named the ten week old puppies after Missouri rivers and they all went to foster homes within hours of arriving at the shelter. 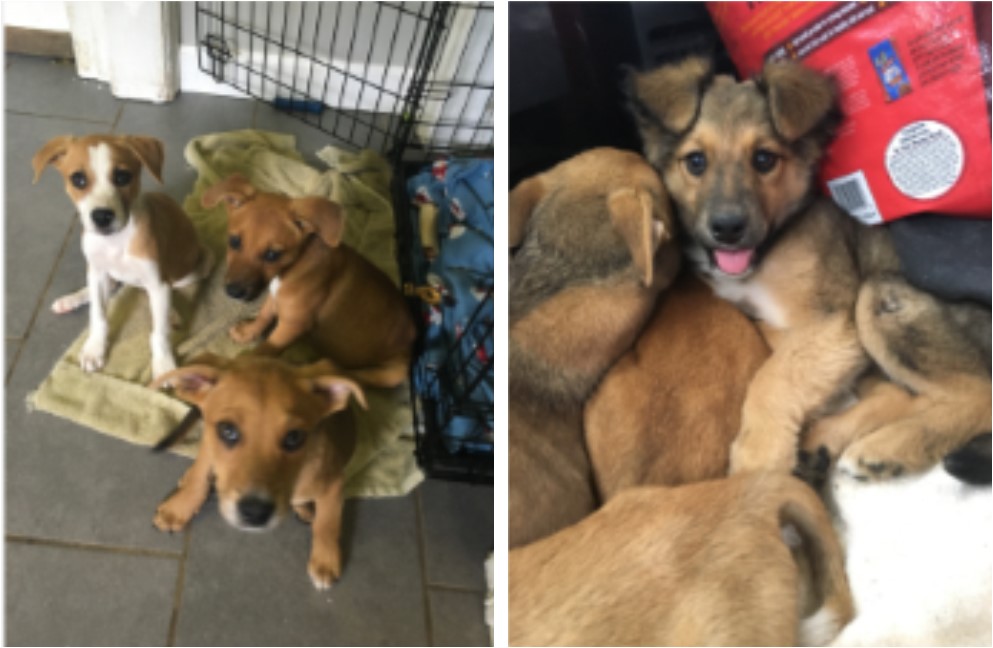 As a volunteer and foster, I thought I understood the mission of Stray Rescue. But going out with Donna gave me an entirely new perspective and a much deeper appreciation for the incredible, back-breaking work done every day in the effort to save even one life.

The commitment to these animals – from Donna crawling through basements and mud to reach a pup in distress, to the staff who give medical care, find foster homes, clean kennel apartments and work on rehabilitation—is not only inspiring but also unparalleled. During our day together we saved seven souls from a life on the streets, not knowing where to find food or water, subject to the cruelty of humans and the harshness of the elements. This is what Stray Rescue does every day for countless animals, showing them the best of humanity when they have experienced the worst.